Top Ten Tuesday - Books That Will Make Me Laugh

Top Ten Tuesday is an original feature created at the lovely The Broke and the Bookish.
Every Tuesday we're given a new topic to create or top ten list.
Today's topic is: Ten Books That Will Make You Laugh (or at least chuckle) 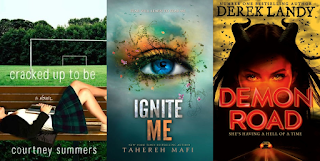 10. Cracked Up to Be by Courtney Summers
“Uh, what are you doing?'
'What does it look like I'm doing?' Jake asks, settling into the seat beside me. The bus jerks forward. 'I'm sitting beside you.'
'No, you're not. Your seat is in the middle. Nice try, though.'
He has the audacity to ignore me, sets his book bag on his lap and rummages through it. After a minute, he pulls out a folded sheet of paper and hands it to me.
I unfold it. 'A love letter? How sweet.'
'No.' He turns pink. 'It's just something I found on the Internet-'
'Porn? You shouldn't have.”
9. The Shatter Me series by Tahereh Mafi
“Are you out of your goddamn mind? You think we can take on two hundred soldiers? I know I am an extremely attractive man, J, but I am not Bruce Lee.”
“Who’s Bruce Lee?”
“Who’s Bruce Lee?” Kenji asks, horrified. “Oh my God. We can’t even be friends anymore.”
“Why? Was he a friend of yours?”
“You know what,” he says, “just stop. Just—I can’t even talk to you right now.”

7. The Vampire Academy series (& Bloodlines) by Richelle Mead
“He cocked his head in an overly dramatic fashion. "Hey, I just got it: it was you, wasn't it?" He looked at Lissa, the back at me. "She got you to kill the fox, didn't she?Some weird kind of lesbian voo—ahhh!”
Ralf burst into flames.
I jumped up and pushed Lissa out of the way—not easy to do, since we were sitting at our desks. We both ended up on the floor as screams—Ralf's in particular—filled the classroom and Ms. Meissner sprinted for the fire extinguisher.
And then, just like that, the flames disappeared. Ralf was still screaming and patting himself down, but he didn't have a single singe mark on him. The only indication of what had happened was the lingering smell of smoke in the air.
For several seconds, the entire classroom froze. Then, slowly, everyone put the pieces together. Moroi magical specializations were well known, and after scanning the room, I deduced three fire users: Ralf, his friend Jacob, and—
Christian Ozera.
Since neither Jacob nor Ralf would have set Ralf on fire, it sort of made the culprit obvious. The fact that Christian was laughing hysterically sort of gave it away too.”

6. Hex Hall by Rachel Hawkins
“You can't do a blocking spell, and you've never heard of L'Occhio di Dio? Man, what kind of witch are you?"
I had an incredibly nasty retort ready that involved his mother and the U.S. Navy, but before I could get it out....”

5. The Lynburn Legacy by Sarah Rees Brennan
“Hark,” he said, his tone very dry. “What stone through yonder window breaks?”
Kami yelled up at him, “It is the east, and Juliet is a jerk!”
Jared abandoned Shakespeare and demanded, “What do you think you’re doing?”
“Throwing a pebble,” said Kami defensively. “Uh… and I’ll pay for the window.”
Jared vanished and Kami was ready to start shouting again, when he reemerged with the pebble clenched in his fist. “This isn’t a pebble! This is a rock.”
“It’s possible that your behaviour has inspired some negative feelings that caused me to pick a slightly overlarge pebble,” Kami admitted.”

4. Fang Girl by Helen Keeble
“Dad pulled me into a brief hug. "You're still my girl. Are you hungry? We got, um--"
"Yes, I already met Toast." I sighed. "Please tell me that Marmalade and Sugar Puff aren't a rabbit and a hamster."
He dropped his gaze sheepishly and mumbled, "Chinchilla.”

“Harry!" said Fred, elbowing Percy out of the way and bowing deeply. "Simply splendid to see you, old boy-"
"Marvelous," said George, pushing Fred aside and seizing Harry's hand in turn. "Absolutely spiffing."
Percy scowled.
"That's enough, now," said Mrs. Weasley.
"Mum!" said Fred as though he'd only just spotted her and seizing her hand too. "How really corking to see you-”

“You're a prefect? Oh Ronnie! That's everyone in the family!"
"What are Fred and I? Next door neighbors?” 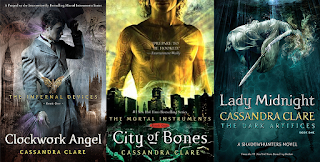 “This time Magnus answered it, his voice booming through the tiny entryway. "WHO DARES DISTURB MY REST?"
Jace looked almost nervous. "Jace Wayland. Remember? I'm from the Clave."
"Oh, yes." Magnus seemed to have perked up. "Are you the one with the blue eyes?"
"He means Alec," Clary said helpfully.
"No. My eyes are usually described as golden," Jace told the intercom. "And luminous."
"Oh, you're that one." Magnus sounded disappointed. If Clary hadn't been so upset, she would have laughed. "I suppose you'd better come up.”

“He bumped into a pay phone and said, 'Excuse me, miss,' on our way in," said Julian.
"It's polite to apologize," said Mark with the same small voice.
"Not to inanimate objects.”

1. All things Rick Riordan
“Are you guys busy?" Juniper asked.
"Well," I said, "we're in the middle of this game against a bunch of monsters and we're trying not to die."
"We're not busy," Annabeth said.”

“I have lightning and wind powers," Jason reminded him. "Piper can turn beautiful and charm people into giving her BMWs. You're no more a freak than we are. And, hey, maybe you can fly, too. Like jump off a building and yell 'Flame on!'"
Leo snorted. "If I did that, you would see a flaming kid falling to his death, and I would be yelling something a little stronger than 'Flame on!”

“One guy wore nothing but a Speedo. He’d painted himself blue and was armed only with a baseball bat. Across his chest were the words COME AT ME, BRO.”
Upplagd av Petra kl. 08:42