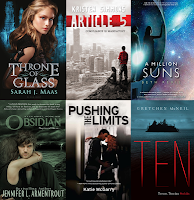 “They haven't killed us yet," I say, and I imagine that one day I will fly a plane over Portland, over Rochester, over every fenced-in city in the whole country, and I will bomb and bomb and bomb, and watch all their buildings smoldering to dust, and all those people melting and bleeding into flame, and I will see how they like it.
If you take, we will take back. Steal from us, and we will rob you blind. When you squeeze, we will hit.
This is the way the world is made now.”
Lauren Oliver, Pandemonium

“Simon rolled his eyes. “It’s a good thing we know the person who’s dating Magnus Bane,” he said.
“Otherwise, I get the feeling we’d all just lie around all the time wondering what the hell to do next.
Or trying to raise the money to hire him by selling lemonade or something.”
Alec looked merely irritated by this comment. “The only way you could raise enough money to hire
Magnus by selling lemonade is if you put meth in it.”
Cassandra Clare, City of Lost Souls

"Every time I question him about the feasibility, he smiles at me like he's Yoda and I'm just a dumbass without the Force.”
Kendare Blake, Girl of Nightmares

"You... don't have the spine!" he hissed with morbid, sadistic amusement.
Unfortunately for him, it was mercy that I lacked, not a spine. I raised my swords high overhead.
He stopped laughing when I had finished hacking off his head.”
Courtney Allison Moulton, Angelfire

“He opened his palm and saw that the watch remained. Still there. Still real.
Varen looked up at the figure that stood atop the fountain.
With a howl of rage, he made it burst apart.
He fell to his knees amid the wreckage and floating dust.
Crumpling into himself, he released a choking sob, knowing that he, too, belonged to the ruin.”
Kelly Creagh, Enshadowed


"I had never been this mad at her before. It was one thing to be attacked by someone you hated, but this was something else. This was the kind of hurt that could only be inflicted by someone you loved, who you thought loved you. It was sort of like being stabbed from the inside out.”
Kami Garcia, Beautiful Darkness

“Her shoulders never shook. No tears streamed down her face. The worst type of crying wasn't the kind everyone could see--the wailing on street corners, the tearing at clothes.
No, the worst kind happened when your soul wept and no matter what you did, there was no way to comfort it. A section withered and became a scar on the part of your soul that survived. For people like me and Echo, our souls contained more scar tissue than life.”
Katie McGarry, Pushing the Limits