Top Ten Tuesday - Books That Will Make Me Swoon

10. Mythos Academy serien av Jennifer Estep
“Are you OK?" I asked.
"I think so." Logan stared at me, and a smile pulled up his lips. "But maybe you should give me mouth-to-mouth, just to make sure.”

8. Crown of Midnight av Sarah J. Maas
“There had never been any line between them, only his own stupid fear and pride. Because from the moment he'd pulled her out of that mine in Endovier and she had set those eyes upon him, still fierce despite a year in hell, he'd been walking toward this, walking to her. So Chaol brushed away her tears, lifter her chin, and kissed her.” 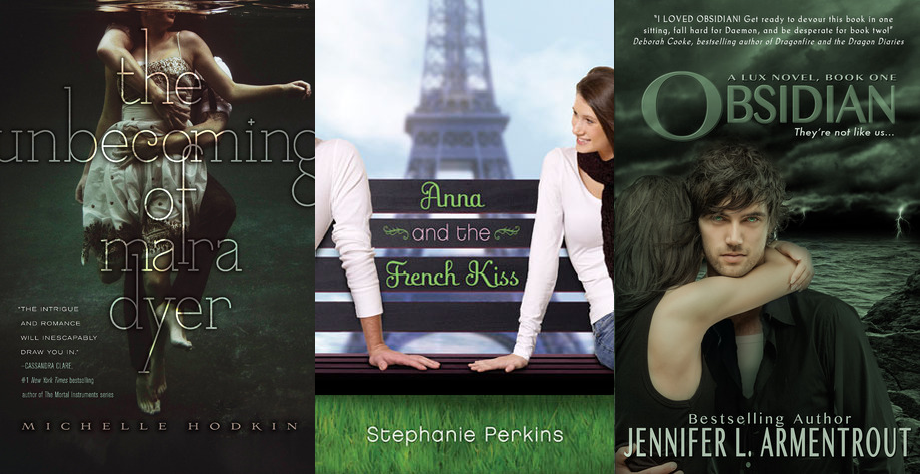 7. Mara Dyer av Michelle Hodkin
“You're the girl who called me an asshole the first time we spoke. The girl who tried to pay for lunch even after you learned I have more money than God. You're the girl who risked her ass to save a dying dog, who makes my chest ache whether you're wearing green silk or ripped jeans. You're the girl that I--" Noah stopped, then took a step closer to me. "You are my girl.”

6. Anna and the French Kiss av Stephanie Perkins
“If you ask me to kiss you, I will,” he says.
His fingers stroke the inside of my wrists, and I burst into flames.
“Kiss me,” I say.
He does.”

5. Lux serien av Jennifer L. Armentrout
“Daemon followed me home after school. Literally. He tailed me in his new Infiniti SUV. My old Camry, with its leaky exhaust and loud muffler, was no match for the speed he wanted to go. I’d brake-checked him several times. He’d blown his horn. It made me feel all warm and fuzzy inside.”

4. Delirium av Lauren Oliver
“As soon as I look up, his eyes click onto my face. The breath whooshes out of my body and everything freezes for a second, as though I’m looking at him through my camera lens, zoomed in all the way, the world pausing for that tiny span of time between the opening and closing of the shutter.”


3. Cruel Beauty av Rosamund Hodge
“You deserve all that and more. It made me happy to see you suffer. I would do it all over again if I could." I realized I was shaking as the words tumbled out of me. "I would do it again and again. Every night I would torment you and laugh. Do you understand? You are never safe with me." I drew a shuddering breath, trying to will away the sting of tears.
He opened his eyes and stared up at me as if I were the door out of Arcadia and back to the true sky. "That's what makes you my favorite." He reached up and wiped a tear off my cheek with his thumb. "Every wicked bit of you.”

2. Bloodlines serien av Richelle Mead
“His eyes were on his heart, completely caught up in his work. 'Just something kicking around in my head. Reminds me of you. Fiery and sweet, all at the same time. A flame in the dark, lighting my way.' His voice... his words... I recognized one of his spirit-driven moments. It should've unnerved me, but there was something sensual about the way he spoke, something that made my breath catch.
A flame in the dark.”

1. Ignite Me av Tahereh Mafi
“His hands are holding my cheeks, and he pulls back just to look me in the eye and his chest is heaving and he says, "I think," he says, "my heart is going to explode," and I wish, more than ever, that I knew how to capture moments like these and revisit them forever.